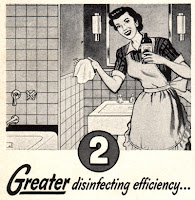 When it comes to advertising, what many people do not recognize are how gender roles are portrayed or illustrated throughout the ad. Many of us see it and move on with our lives, never stopping to think why it is the way that it is. Before, society has portrayed the men as the dominant role in generally anything, having the women to either be the support or undermining them. Today, that role has changed, however, many advertisers still rely on dominant male roles to get their message across to their audience. Take for instance, cleaning products. When we see generally any cleaning product in the media, majority of the time it consists of a woman using that product around the household. The idea that a woman's role should be to care for the house, husband, and children are still portrayed in today's society through these commercials. Sure, there are commercials where men are hosting or advertising the product, such as Oxy Clean, but the targeted audience usually would be the women. Before, these traditions would be highly portrayed through many households, but in modern society, gender roles have changed to the point where women are successful enough to take care of themselves and become as equal as the men. So why still target women as these cleaning maids? Why can't the men be the ones enjoying the cleaning routines rather than doing it for the women? As the audience, our minds are so used to the fact that women are meant to care have become so distinct that it will never completely fade away, that we may be equal, but we're always slightly beneath the role of men.
Posted by Unknown at 10:55 PM